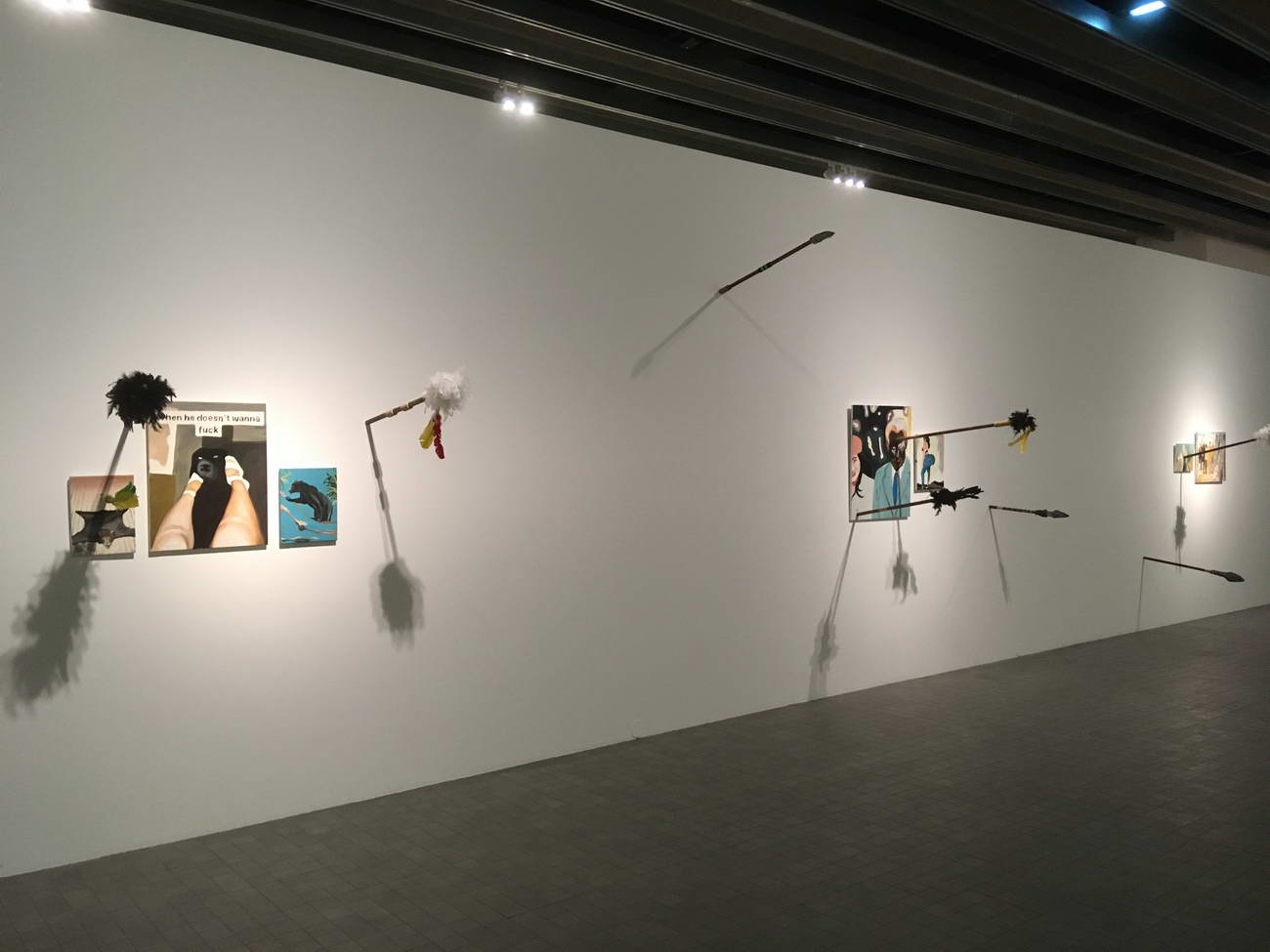 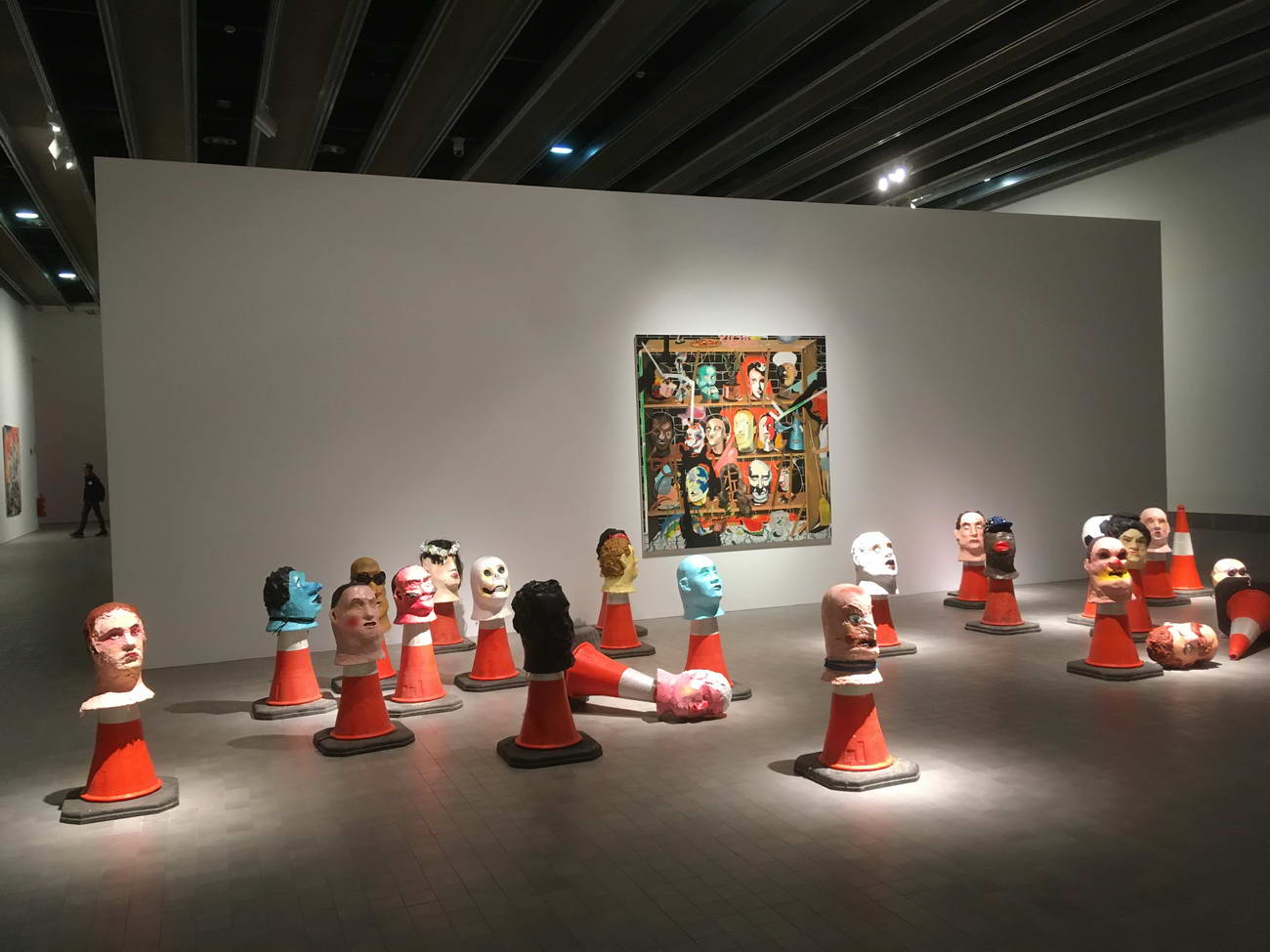 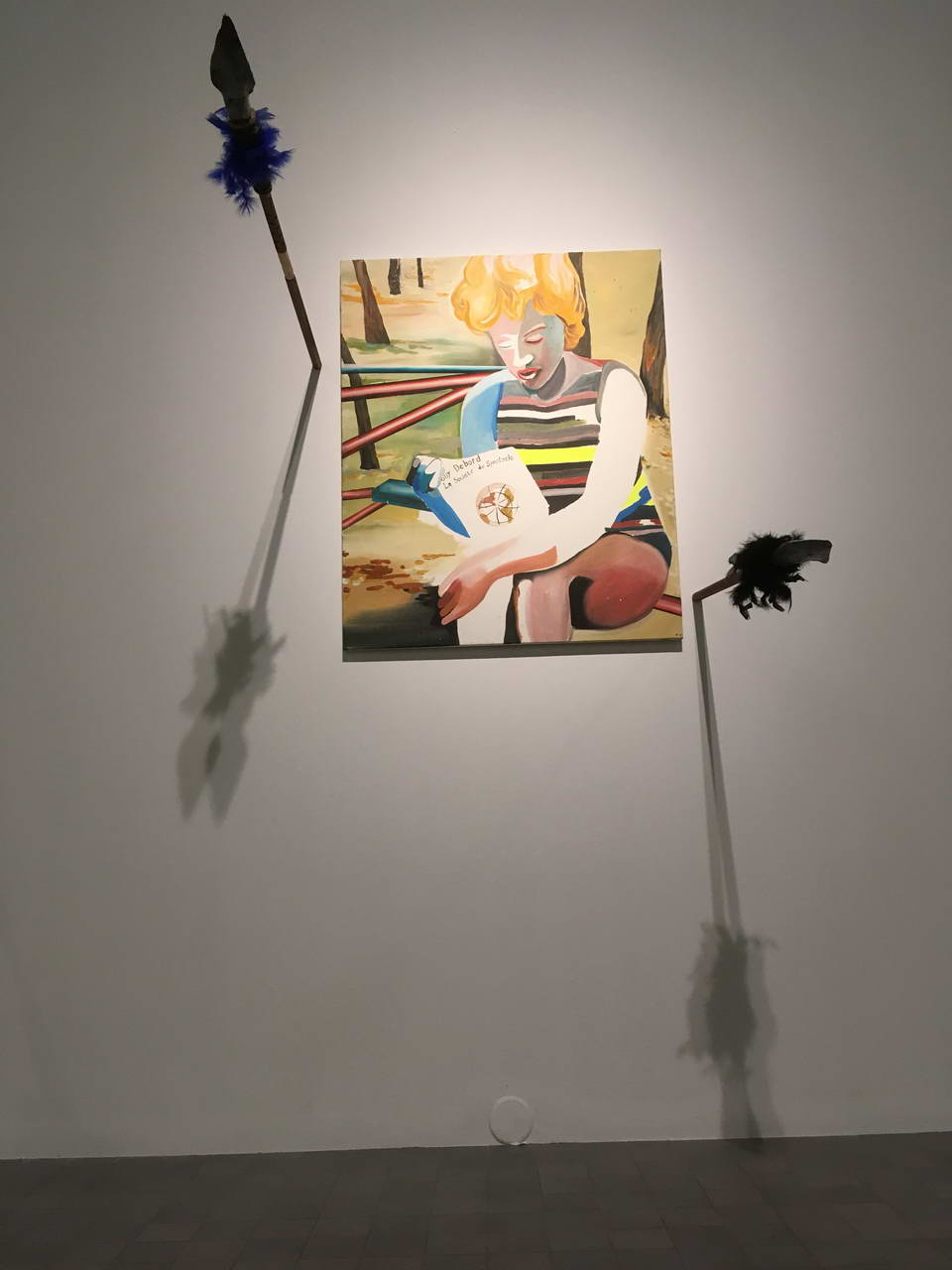 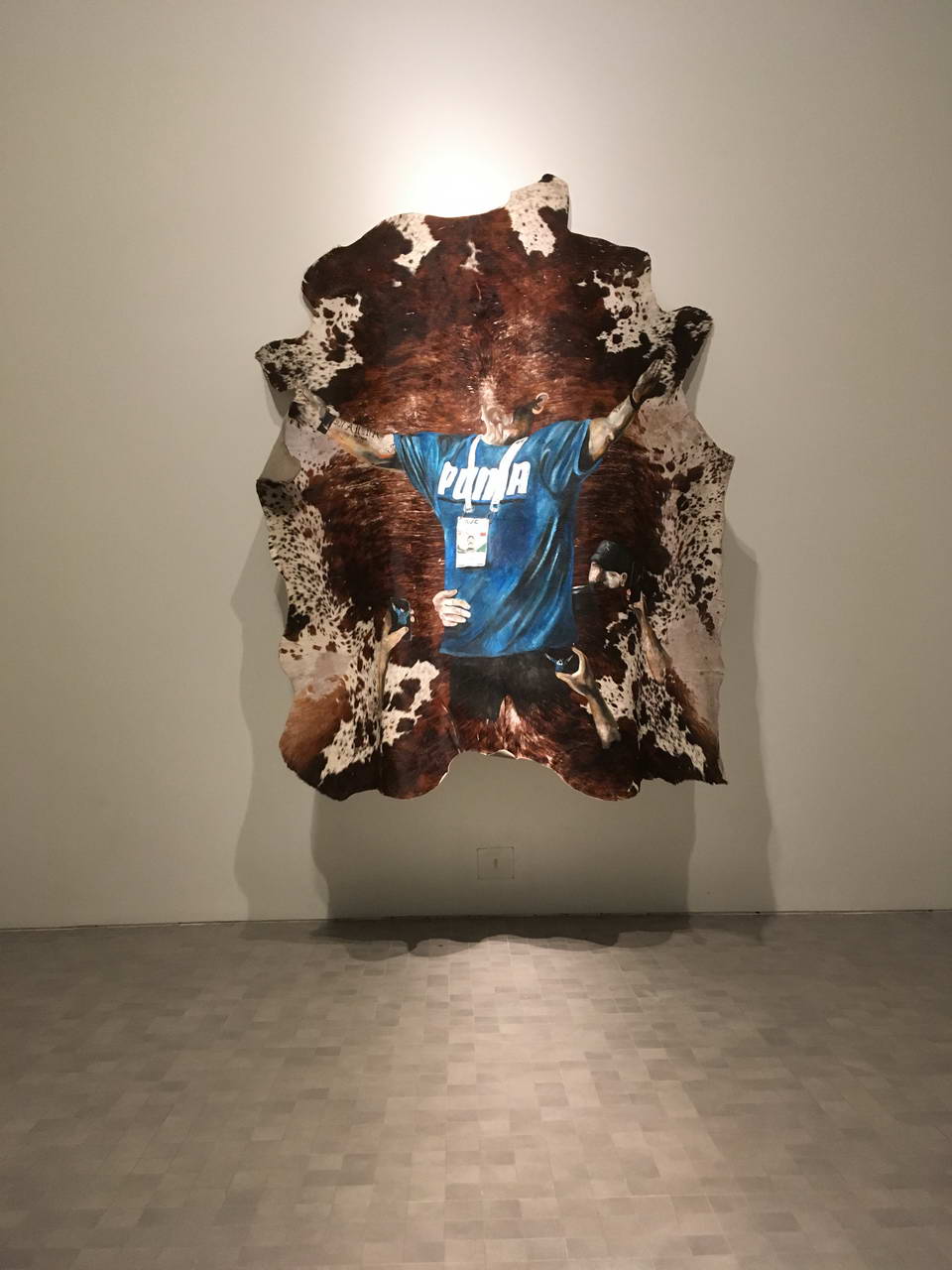 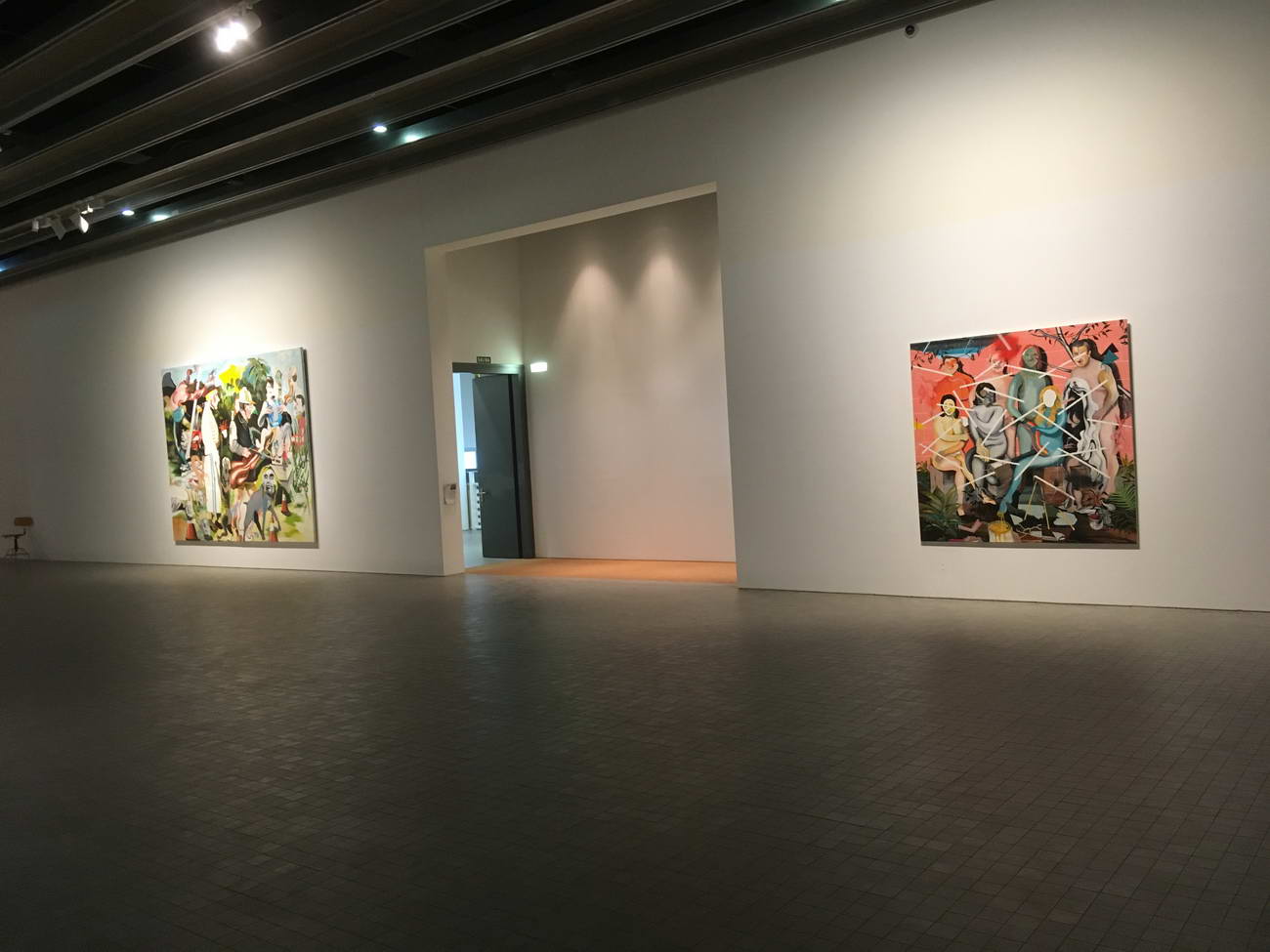 The hunter-gatherer binomial should actually be a trinomial: the hunter-gatherer-painter. The generating duo sustained a third class of men and women who layed the foundations of symbolism through their painting of animals.The animal was later transformed into garments; the symbols wall progressed to those on metalic emblems and finally into prints. Clans were organised and identified by images of wild beasts; later, medieval kings were distinguished by lions and eagles, and animal heads were used as trophies denoting manly deeds. Over the ensuing centuries, something must have taken place for a lionhead painted on a leather shield to have given way to a cockerel printed on t-shirt made from petroleum derivatives, for the courage symbolised by an eagle on a pedestal beneath the head of an emperor to be replaced by a tiny crocodile representing status, and for the mammoth, as a symbol of a hunter's success, to have changed to a crocodile signalling to observers that the wearer has wealth to pay for such a shirt. Symbolism has now also yielded to obviousness in gigantic horses covering entire shirts. Vulgarity is the inheritance of the origin of symbolism linked to animals, of the divinity embodied in painting. The passing of time shows that our extinction begins to be a desirable and fortunate event.

Mammoths, elephants. Perhaps we have never been different. The King of Spain shoots an elephant and the world is horrified. Perhaps the Monarch emeritus thinks that we are clichéd since man has always killed animals, meaning basic proportionality ensures someone has the status of killing pachyderms. He is a man of the past, one of those who saw the colonial world die; he has not understood that the new scenario has become something different from what it was. Neither does he know that this change has made the current world a worse place than it was a few decades ago, contradicting the idea that progress is always good. The king is stupefied by these epoch changes that generate a different landscape: a new world of confusion.

In writing this, I searched for an image that would serve to define the era and  decided that Donald Trump's toupée is a perfect allegory. It is voluminous yet not very consistent, volatile, colourful yet with a marked chromatic incoherence. It is fake; it is part of a spectacle. And the idea of a spectacle reminds me of the 1960s, of Debord and the failure of the French May 1968. It seems to be a far cry away from today's Situationism; in fact everything seems to be very distanced in the massive consumption of ideas reduced to occurrences. However, 'The Society of the Spectacle' has never been more valid than in a time during which borders have been dissolved, taking things one step further, turning everything into a simulacrum, fulfilling Baudrillard's prophecy. The ferocity of the passage of these seemingly soft years has rendered the 'bad utopias' useless, those that with Orwell at the head set into motion an end of the hypercommunicated world in which someone controlled everything by means repressing the masses.We, the masses, have thrown ourselves into the arms of Big Brother, demanding more control, more security, whilst shouting that we would pay him for the effort ceding him practically all our freedom.

Freedom, Equality and Fraternity in exchange for connectivity. Big business.

There has only been one open battle in the war that we decided to lose: the battle of  images, as Joan Fontcuberta has well seen .In that battle the final remains of collective intelligence have fallen, and this has been done with the use of the irony, loaded with pessimism, in a broken society whose principles are reduced to flows of liquidity. Yann Leto collects, he compulsively hunts, images. He obsessively stores and creates a world of cuttings, paying great attention to developments over time in its fragmentary nature .He is a sniper in the battle of images; he understands the dialectic of his painting as a transposition of the idea of the infinite war that comprises the West, a war that others must pay. To debate on colonialism in this context is fascinating when, against all odds, the metropolises have taken on an old role with respect to their former colonies. Prince Harry pierced by twelve African lances: the revenge of the anticolonial apostolate. A revenge that is romantic, and albeit unprobable this makes it no less desirable.

Two men fight in a ring face to face .It's a stage, a spectacle, the simulation of a battle. The ring is a closed space for the dance.The boxers dance.

The actors of Yann Leto dance. They turn as do the diners of Ulysses' Gaze by Theo Angelopoulos; absorbed in an invisible yet present drama. Dancing among the ruins of the real. They step on the embers among which the simulacrum is born, in the circular movement of the characters, in the frantic dance in which the louts sing of a desired apocalypse.The referents of high culture, in the whirlwind prompted Leto's painting, sink into an underworld of low culture in which resonates the message that Jim Carrey receives in the movie The Mask: it was you all along; [the mask only helped].A dance of masks; a stage for the end of a time in pursuit of another worse yet.

Dances, battles, simulacra, colony. When all is said and done, the story of contemporaneity is expressed in struggles. Painting, fiction by definition, will not be devoured by the simulacrum. Or at least Leto's won't be.